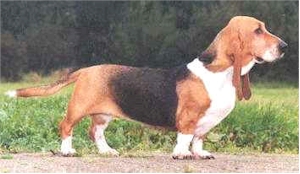 Our love for the French Basset started in 1973 with our female ‘Inou du Toutounier’. Always cheerful, a little bit self-willed and with a great devotion for her owner. That characterised Inou and all the other French Bassets that were later born in our house. Irresistible and incredibly sweet. With a stable personality. They have a talent to please, a talent to sense. They are fond of people and other houds. Famous, because of their special appearance: a hound from days gone by. They could have jumped out of an old medieval painting, with their long ears and beautiful colours. 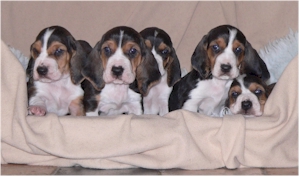 Then our Jacobine joined Inou, after all, they are packhounds. Breeding pups formed the further inspiration to do more for and with the Basset Artésien Normand. Exibitions are another aspect. Good health, a good character, good movement and a nice appearance play a major role. Furthermore the hunt. We did examens to obtain a ‘brevet de chasse’. Today, 36 years later, we realise that we had lots of champions.

Some of our hounds went to the USA. With these hounds Mr and Mrs Goeldner build a pack close to Memphis: the ‘Mississippi Valley Bassets’. A beautiful pack with well trained French Bassets for the hunt on several types of game, such as swamp rabbits and cottontail rabbits.

This website gives you an inside in this particular breed with the most pronounced traits of character: soft, nice, cheerful and irrestible.

The French Basset, a passion for life. 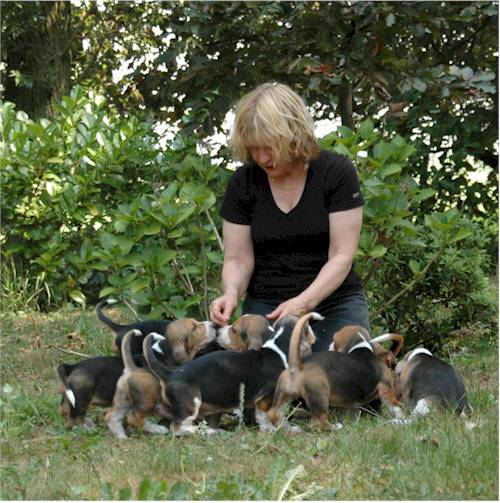 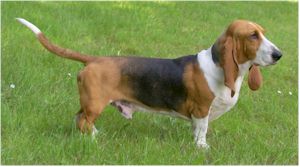 At first sight a hound of days gone by, just jumped out of a mediaval painting. A noble and graceful head, solidly built, but not fat or coarse. He shows power, style and elegance. His coat is short-haired, mostly tri-coloured. His calm and friendly character makes him a good buddy, housemate and friend for the whole family. 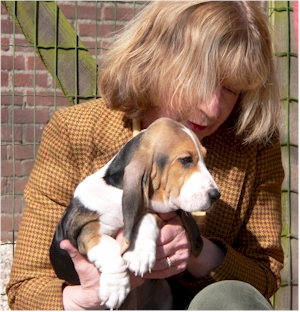 Good health of the Basset, a good character and a nice appearance. In 1973 we had our first Basset Artésien Normand. She came from the famous ‘du Toutounier’ bloodline. In 1979 our first litter was born. Since then we shared a lot of experiences and knowledge with other French and Dutch breeders. With a lot of love and passion we set up a kennel for the Bassets. 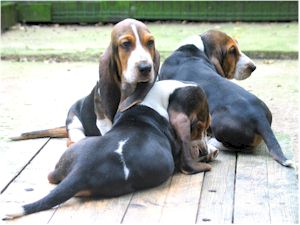 We still see the French bloodlines of kennel ‘Leparoux’, ‘Rameaux de Cuisy’ (Marc Boin) and ‘de la Petite Sologne’ (Maurice Leblanc), the ancestors of our hounds. But also today’s bloodlines as ‘de la Petite Gatine’ and ‘du Grand Hourqueyre’ are united in our ‘de Bérénice’ blood. All puppies are born in our house and are raised with great care as part of the family. We emphasise a good socialisation process, puppies must get accustomed to all noises (Tv and radio) in and around the house. Apart from loving care, we put high demands on character, health and appearance of the parent-animals. We follow the breeding instructions set by the Dutch authorities. At a later stage we hold close contact with the new pup-owners to be sure that the puppies grow up well. For pictures see puppies. 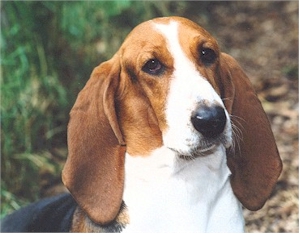 Our Bassets go to exibitions in The Netherlands and abroad. The first show is the so called “young doggy day” of our association. Later on big shows as the ‘Championnat de France’; ‘Winnershow’ in Amsterdam, even the world championships. Our Bassets already won many medals and trophees. See also champions

Manage Cookie Consent
To provide the best experiences, we use technologies like cookies to store and/or access device information. Consenting to these technologies will allow us to process data such as browsing behavior or unique IDs on this site. Not consenting or withdrawing consent, may adversely affect certain features and functions.
Beheer opties Beheer diensten Beheer leveranciers Lees meer over deze doeleinden
View preferences
{title} {title} {title}